5 Plastic Free Deodorant You Should Try 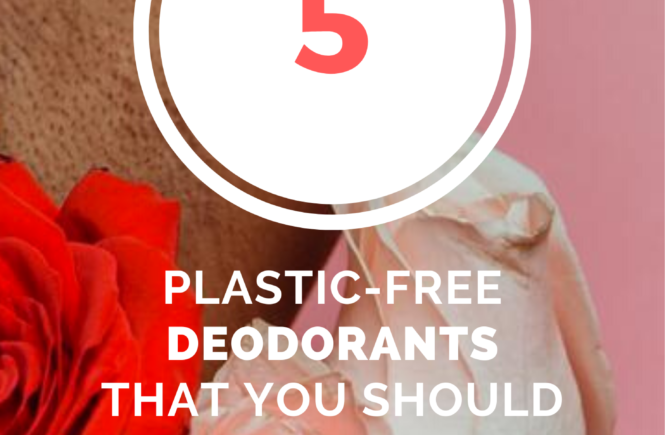 As plastic pollution remains an issue on the global scale many ingenious companies continue to surprise us with alternative products that eliminate plastic without compromising quality.

One source of plastic pollution, that you probably use every day without noticing, is your deodorant stick.

I get it, no one likes being smelly, but does it have to be packaged in plastic?

Can I just start by saying how cute these tubes are?

Yes, that is a snake lifting weights and you know he isn’t worried about how he smells during his work out because Meow Meow Tweet has him covered.

This paper push pop style tube is vegan and cruelty free with a fully compostable or recyclable package.

This plastic free deodorant is also baking soda free for sensitive skinned people like me.

With arrowroot powder to absorb moisture and magnesium hydroxide to stop stinky bacteria in its tracks this deodorant won’t let you down even on the dampest of days.

To top it off:

The moisturizing ingredients including cocoa and shea butters will leave your your pits feeling pampered as well as stench free.

Reviewers have raved about finally finding a deodorant that is both gentle and effective, one saying that it was even soothing to her post shave skin.

A Quick Note on Ingredients:

The first is magnesium hydroxide, which has been commercially available in a liquid version called milk of magnesia for decades.

The second is Zinc Oxide. Whether you know it or not you are likely already using this ingredient in the form of sunscreen and other cosmetics.

I can hear it now:

Ok, but what makes these any better than aluminum? They don’t exactly sound “natural”.

The reality is that all of these ingredients, including aluminum, are naturally occurring minerals.

Aluminum based antiperspirants eliminate moisture from the equation to prevent odor, but this means clogging up your pores and preventing normal perspiration.

Magnesium hydroxide and zinc oxide don’t stop you from sweating.

Instead, they fight against the bacteria that feed on your sweat and create odor.

This lets your sweat do what it was meant to do, cool you off, while avoiding the subsequent stink.

The other concern that comes up regarding these ingredients is the issue of Nano particles and the possibility that the structure of these small particles may allow them to permeate our skin.

Not only are many producers of natural deodorants moving toward non-nano versions—say that five times fast—but there isn’t much evidence that points to this being an actual danger to people who use these products.

Chances are you already use these ingredients in other applications and have never thought twice about them!

Without ingredients like these you may find your deodorant lacks much in the way of deodorizing power.

Our next plastic free deodorant option is also a push pop style applicator in compostable or recyclable paper.

This is a baking soda formula, which if you aren’t sensitive to it, can be great!

Baking soda is famous for its odor fighting power after all!

One thing I love about this deodorant is that there is no false advertising here in calling these coconut sticks.

With the addition of shea butter in second place this deodorant will definitely pack a moisturizing punch.

This formula uses cornstarch to help absorb excess moisture and gets an antioxidant boost from Rosemary Oil Extract (ROE).

Virgin Coconut oil has a much stronger aroma than the more refined versions, meaning this deodorant comes with natural tropical twist.

You can either enjoy the simple subtle scent that comes along with the coconut oil itself or try out the Lemongrass & Tea Tree scent which will have the added benefit of those oils’ antibacterial properties.

One good tip for this product is to make sure you allow it to get warm against your skin for a moment before applying it.

Shea butter tends to be solid at room temperature so make sure to give this one a second and your patience will be rewarded with a smoother application.

Another Approach to Odor Control

You’re probably aware at this point of the concept of there being “good” and “bad” bacteria in your gut, the balance of which can really impact your digestion and health.

Often, though, we forget about the variety of bacteria that make their home all over our bodies. Remember our equation from earlier?

Don’t get grossed out yet, stick with me.

We have a neutral, sometimes even beneficial, relationship with many of the bacteria that call our skin home.
However, a few trouble makers like to make their home in the warm wet environment under our arms.

Here’s the part you’re allowed to get grossed out about:

It’s these guys who eat our dead skin cells, sweat, and sebum—pumping out stinky waste products as a result.

But what if you could balance your armpit flora just like you do with your gut flora?

That’s where this next plastic free deodorant comes in:

Their probiotic formula reduces odor by encouraging the growth of good bacteria in order to reduce numbers of their smelly counterparts.

Dirty Hippie is also the first line on this list so far that has both baking soda and baking soda free offerings.

With a number of different scent options including Non-scents (unscented), Sexy Hippie (Ylang Ylang and Neroli), Don’t Worry Be Hippie (Lavender, Lemon, Patchouli & Bergamot), and more there is bound to be something for everyone here.

You can also choose between the softer jarred formula, or the firmer push pop applicator.

If all those options are a bit much—and you are indecisive like me—Dirty Hippie offers sample sizes!

4. Lil Sensitive Pit Cream from Fat and The Moon

Next up on the list is another line that has both baking soda and baking soda free formulas.

Since I personally am sensitive to baking soda, I love that they added Lil Sensitive option.

Fat and The Moons creams are aluminum and paraben free and come packaged in either a small sample tin or a nice reusable glass jar.

If you’ve never used a cream or paste style deodorant before it can be a bit of an adjustment. Some people really don’t like the idea of having to use their fingers.

Once you get past the sticky finger phase, you might find its easier to make sure you have good coverage when applying it this way.

Fat and The Moon use arrowroot powder to soak up sweat and magnesium hydroxide to fight odor causing bacteria.

Like the coconut stick, this deodorant list coconut oil as it’s first ingredient. As many of these deodorants contain oils its important not to over apply to avoid oil stains in your clothes.

Lil Sensitive comes in an earthy, basil and vetiver scent.

So far, we’ve seen push pops and pastes, but this last plastic free option may be the most interesting one so far. Ethique’s deodorant bar is just that, a bar.

That’s not the only thing that makes this deodorant a unique one.

While many of the past formulas used arrowroot or cornstarch to absorb moisture, Ethique’s bar uses bamboo.

I know what you’re thinking:

Truth is, I don’t have all of the answers, but bamboo apparently has some super absorbent properties

Which I suppose shouldn’t surprise me, they do make pretty awesome paper towels.

Ethique claims that bamboo can hold up to 200% its own weight in sweat and oils.

On top of that, this formula has zinc oxide and magnesium hydroxide fighting back against those odor causing nasties.

Moisturizing ingredients such as jojoba and sweet almond oil will leave you moisturized and smooth.

Plus, the solid bar form means a no mess no fuss application!

This bar is another great option for those with sensitive skin as its baking soda free!

Since all of these plastic free deodorant are also non-traditional natural formulations there are a couple of things to be aware of.

If, like me, you have been using clinical strength deodorants or—deodorant with a lot of aluminum in the formula—for some time, you may notice when you switch to a natural product that your deo seems to be inconsistent.

Some days you won’t notice a whiff and other days you’ll realize you stink to the high heavens.

Let me let you in on a secret it took me way too long to discover.

It may be your clothes. Not your deodorant.

The waxy build up from aluminum deodorants you find under your arms in the shower also has a bad habit of getting embedded in the fabric of your clothes. Unfortunately, bacteria also find themselves stuck in this goop in your shirts.

Did you know pit stains have little to do with sweat and a lot to do with antiperspirants?

A bit on the ironic side if you ask me.

It’s pretty easy to find out if this is the issue. Often clothes that have this build up are visibly stained and will smell when you get them wet.

This is because the dormant bacteria in the shirt start their stinky work again once they come into contact with your sweat and body heat.

Depending on how old the garment is and how long the buildup has been there the problem may be able to be resolved through an enzyme cleaner.

You may notice that with each of these descriptions I stated whether or not the deodorant contained baking soda.

That’s because it’s a crucial detail for some of us.

Many natural deodorants use baking soda as a method for controlling bacterial growth.

While this works well for many people with zero issues, for those few of us with sensitive skin baking soda can cause a painful bumpy rash.

This may seem an obvious thing to say but it needs to be said:

Do not try to grin and bare it through the rash and continue using the deodorant if this happens to you.

As much as it may hurt your zero waste heart to abandon an unfinished product, your health always come first!

Traditional stick deodorants all have one thing in common.

They are really tough to recycle properly!

The many parts of the deodorant stick, unfortunately, means many kinds of plastic. Not to mention that most of the small parts don’t have clearly marked recycling numbers.

Often—in order to avoid contaminating recyclables when putting a stick in the curbside bin—some disassembly is required.

The little turn knob, the internal parts that push the stick upwards, and even the part that covers the product under the lid, most of them will not be recyclable curbside.

Let me get real for a second.

The applicators or lack there of with some of these products isn’t the most convenient thing in the world.

Some of the producers themselves even admit on their sites that they aren’t a perfect design solution.

But isn’t it worth it?

The designs for plastic free products will only become better with time.

So, isn’t it worth an occasional inconvenience to reduce the amount of plastic we send to our landfills and oceans?

Hy there, I am Antonia - the creator of My Zero Waste Blog. I am passionate about the environment, sustainability, bohemianism, and photography. I love connecting and inspiring other people through my personal experience on how to live a more conscious and low-impact lifestyle.
Join my journey!